In this blog, I will show you how SiFive achieved Best Effort scores through the use of compiler techniques.

Using a SiFive E31 Standard Core, a single-issue in-order RV32IMAC core, as an example to demonstrate how a Dhrystone score can be improved dramatically. The following table a summary of the score. As expected, the E31 core reaches its peak performance of 1 IPC due to its single-issue architecture. However, the Dhrystone score varies by different compiler option sets and existence of library specific tuning. By using an aggressive compiler option set with a customized strcmp instruction, the Dhrystone score increases by 73% (1.61 to 2.78).

The Dhrystone score is higher if fewer cycles are spent per Dhrystone iteration. One can reduce the cycle number by improving the micro-architecture (e.g., branch prediction, load latency, cache hit rate), ultimately the minimal cycle number will be limited by the instruction count.

Running the Dhrystone benchmark using the Legal option, the SiFive E31 core will achieve a score of 1.61 DMIPS/Mhz, which is 96% of the maximum. Thus, a SiFive E31 core at peak performance offers IPC = 0.958. 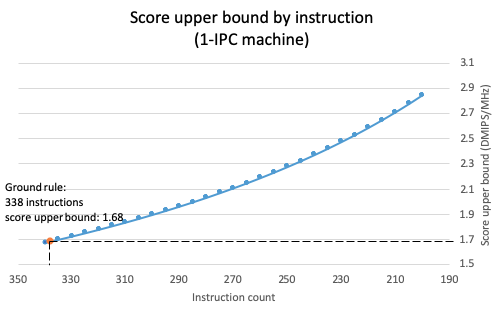 Function inlining and link time optimization (LTO) can reduce the number of instructions needed to perform the Dhrystone benchmark workload.

The chart below shows the dynamic instruction count under the 3 compiler options: 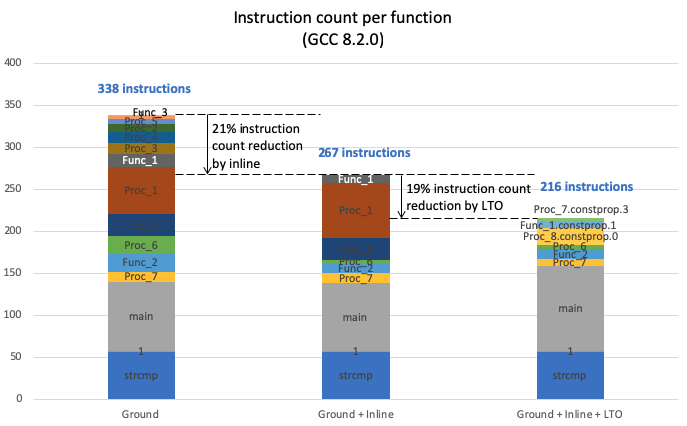 Instruction count reduction in the Dhrystone loop directly boosts the score without needing changes to the micro-architecture of the processor. In the chart below we mark the points of inline and inline + LTO. Assuming constant IPC (0.958), the score may theoretically increase 56% (1.68 to 2.63 DMIPS/Mhz). For the SiFive E31 at IPC = 0.958, the score increases 57%, from 1.61 to 2.53. 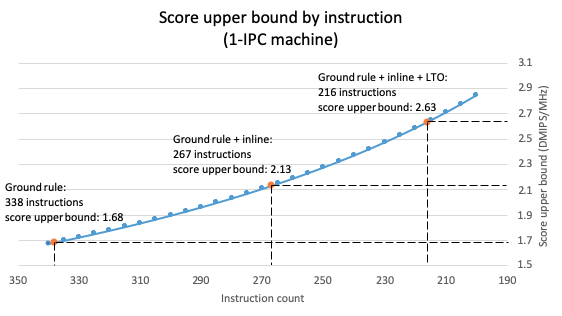 The Dhrystone benchmark relies largely on standard C library functions. Analyzing the results of the previous optimizations I determined strcmp() occupies 16%, 21% and 26% of total instruction in the three compiler option sets, as represented by the below chart. 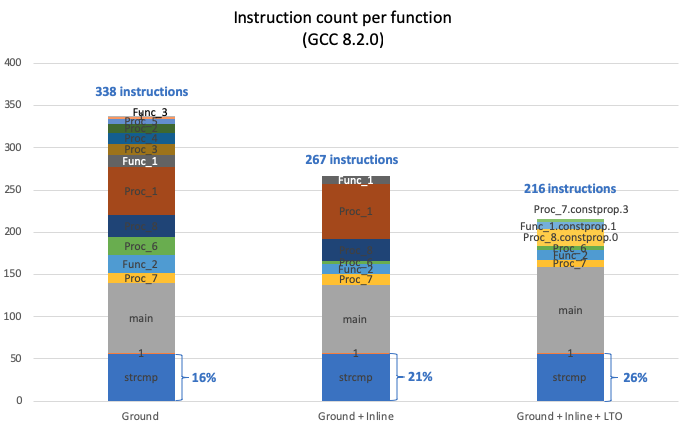 In the circumstances described above, the Dhrystone score is more affected by the implementation of the strcmp() function than the processor micro-architecture as up to 26% of the code is a single function call.

To further improve Dhrystone score, a custom instruction to improve strcmp() performance can be created to replace the strcmp() function, effectively eliminate around twenty instructions per Dhrystone iteration, based on the RISC-V newlib strcmp implementation. As the chart below shows, this can improve the score by 7%, 8%, and 10% respectively for the three options. For the SiFive E31 core (IPC = 0.958) this increases the score to 1.70, 2.11 and 2.78, respectively. 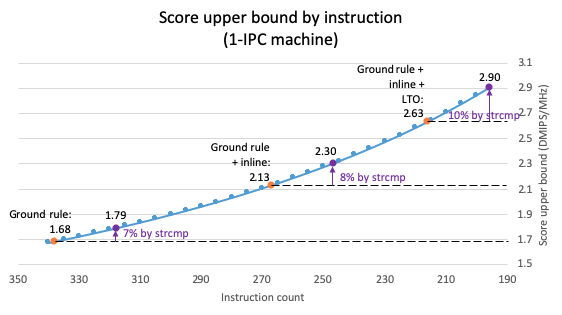 SiFive does not include a hardware implementation of strcmp, as it is unlikely to benefit many embedded processor applications. However, there may be workloads that a performance improvement based on customized instructions are worthwhile. SiFive Core Designer can help you understand the options available for configuring a core to your needs, including adding the SiFive custom instruction extension, SCIE.

SiFive's Freedom E SDK includes the Dhrystone benchmark along with preset optimizations for the 3 compiler optimizations outlined in this blog by setting the DHRY_OPTION parameter when executing the makefile:

With this understanding of Dhrystone performance, you can now see how the score may be influenced by compiler options, and micro-architecture changes. When comparing manufacturer provided scores, the conditions of the test are important to understand so that compiler optimizations are not confused with micro-architectural advantages.